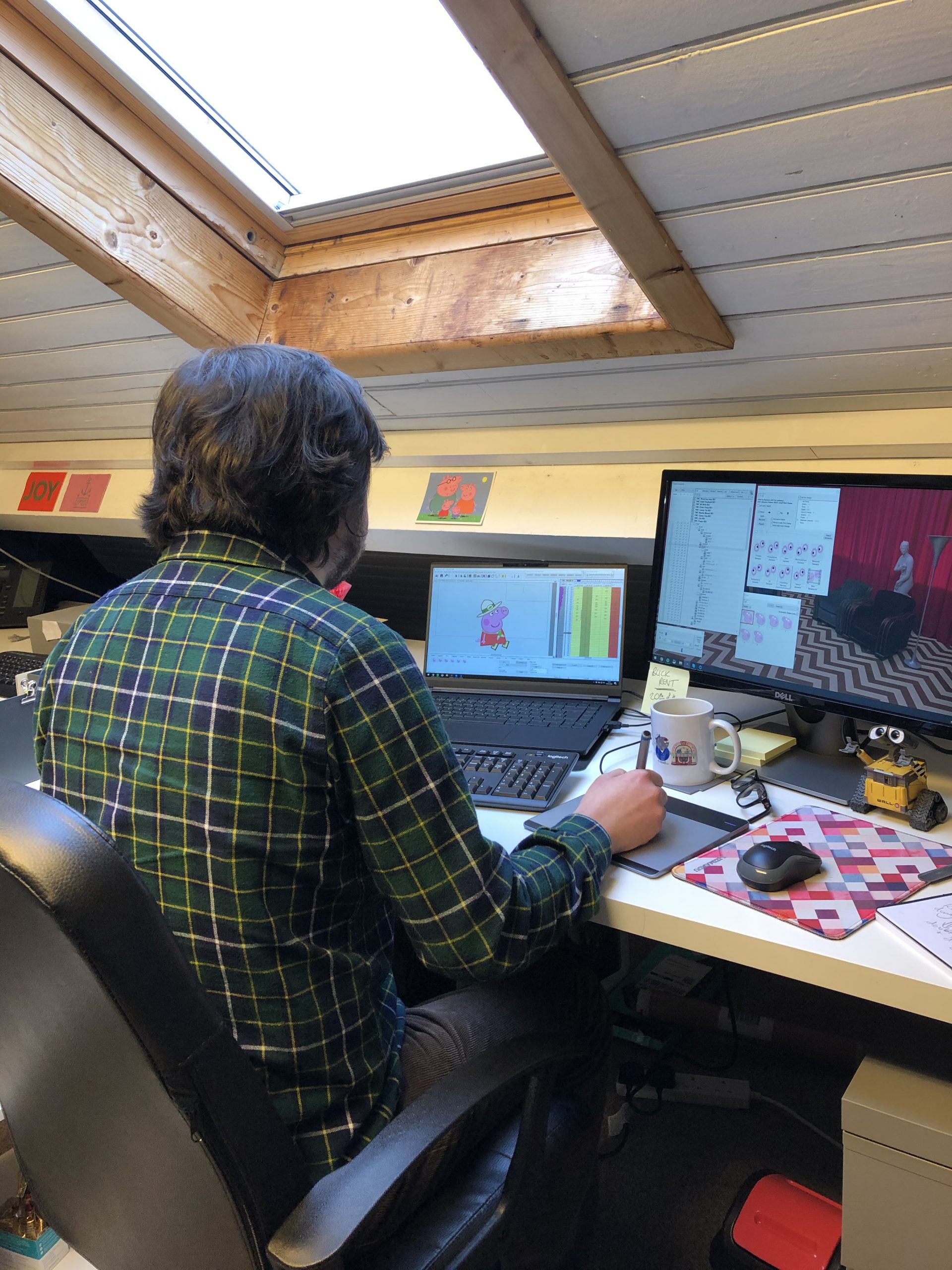 #Meettheresident 2020! We have amazing residents in all of our studios and it is important to us to share what they do, to hear their story of who they are and how they got to where they are now. You can learn and be inspired by other people’s journey and to see how different people approach their career.

We caught up with our new resident – David Gray who is a character animator for a London-based animation studio, producing children’s television.

I’m a character animator, working mostly on pre-school television shows. I bring the characters to life with movement and personality.

Any projects that you are currently working on?

I’m currently working on the next series of Peppa Pig.

I get a lot ideas and energy listening to music. I also recently did some sketches and illustrations based on my favourite TV shows and some books I had read, so it could be anything really.  I also really enjoy watching other artists work, watching their processes and thoughts play out.

I get a buzz seeing or hearing works in progress, development sketches and rough cuts too – rough, hand-drawn animation is really exciting to watch – as you can still see the hand involved in its creation. I also think it demystifies the artistic process a bit, knowing that the final, polished piece – be it a film, a drawing or song or whatever – took a lot of working out, a lot of thought and a fair few mistakes and corrections to get it just right.

I don’t draw much in my day job so I try and indulge that outside with sketchbook work and illustration projects. I also try and have, and explore, other interests outside of art and animation to keep the other parts of my mind bubbling and active.

Chuck Jones, who was an American animation director at Warner Bros. back in the 1940s & 50s.  He was a tremendous draughtsman, had an impeccable sense of comic timing and directed some of my favourite cartoons from the Golden Age of Hollywood animation.

What piece of software / tool / equipment would you struggle to run your business without?

A piece of animation software called CelAction. It’s been the backbone of every big series job I’ve had over the past 14 years.

What are your plans / hopes/ ambitions for the future?

I’d like to branch out a bit more and try and get into story boarding or make more of my illustration work.  I’m also trying to write a script, based on a short story, with the hopes of developing it into a short animated film.

Open
Almost the weekend and thankfully a bit of sun ☀

We got the pleasure to catch up and interview Wilson from @motivepeak & Benji from @concreteclouds__ who are Blick ...

Open
#Meettheresident We got the pleasure to catch up

Open
‘The Power of Design’ series is a project that

Open
Quick refresh of our Malone hallway - reusing and

Open
Have you entered yet? @belfastdesignwk has teamed

Open
VIRTUAL SERVICES We offer virtual services for a

Open
Behind The Scenes - The Blick Team⁠ ⁠ We wante

Open
-PRIVATE OFFICE AVAILABLE- We have a wonderful p

Open
We wanted to do a throwback to last year's Belfast

Open
Looking for a new podcast series to listen to? ---

Open
Some #MondayMotivation for any of you using this p

Open
Looking back to the start of March which now seems

Happy Friday and another lovely sunny weekend ahead! looking forward to getting back into this space once things get back to normal!

Check this out before it finishes on 21st May - beautiful online exhibition by Blick resident Gallery 545 ‘Contemporary Art of Northern Ireland ...

Open
Check this out before it finishes on 21st May - be

Grateful to have an excuse to leave home for studio building checks and mail collection and a few hours of uninterrupted work in this lovely space ...

Open
Grateful to have an excuse to leave home for studi

Missing this cosy workspace and our lovely residents. Fingers crossed we get back to normal sooner rather than later and can enjoy our Fridays ...

Open
Missing this cosy workspace and our lovely residen

#MeetTheResident with one of our more hands-on creative residents Gareth McCullagh in our Malone studio. Gareth trained in law and was a practising ...

Open
#MeetTheResident with one of our more hands-on cre

Looking forward to getting back to this lovely peaceful space and getting some separation between work and home again.

Open
Looking forward to getting back to this lovely pea

A very quiet and quite spooky Cathedral Quarter during lockdown. So different from the usual vibrant atmosphere

Open
A very quiet and quite spooky Cathedral Quarter du

Some motivation for the week @stbdpodcast podcast guide - some of our favourites from business to inspiration to wellbeing there's something for ...

Open
Some motivation for the week @stbdpodcast podcast

We know there are lots of surveys floating about at the minute, so sorry to add another one to the mix, but we are working with our residents to find ...

Open
We know there are lots of surveys floating about a

We have been busy behind the scenes planning for a somewhat uncertain future and enjoying a bit of downtime so have taken a bit of a break from social...

Open
We have been busy behind the scenes planning for a

Open
Monday Motivation on a very difficult week for mos

#fridayfocus
Happy Friday everyone!
Hope you all are keeping cosy and warm in this spring weather.
.
We are back again with some new ...

Open
#fridayfocus Happy Friday everyone! Hope you all