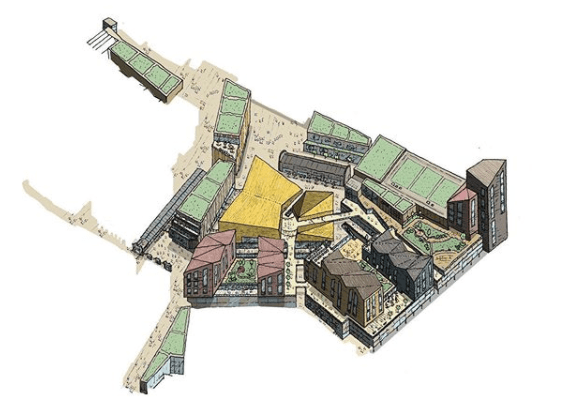 Can you tell us a bit about what you do?

I am an architectural illustrator and concept artist. I help to tell the story of projects by providing drawings that are stylistically tailored for each design stage, from feasibility studies through to planning and final marketing imagery. I work collaboratively with architects, designers, and developers throughout the UK and internationally. In addition to working in architecture, I also provide concept artwork for film and tv and illustrations for other creative industries.

Why did you want to start your own business?

I was working in architectural practice in London and I was always drawing. It was clear to me early in my career and architectural education that I did not want to follow the traditional path. After building up enough confidence I decided to take a leap of faith and move back to Belfast in order to work in film as a concept artist.

In order to keep myself afloat during what I anticipated to be a career path that would have its fair share of lulls, I started Concrete Clouds, doing what I had always done – drawing. With the relationships I had built in practice I was able to ensure consistent work and begin my journey on my own and on my own terms.

I also realized that I could fold conceptual artwork for film into Concrete Clouds and offer both services, with architecture providing steady work and film injecting the odd crazy adventure. Plus, the name was floating about unused since I was about 13. It was my band’s name but unfortunately, we didn’t quite take off. So I thought it fit well for what I do now all these years later.

Any projects that you are currently working on?

I am working on a number of projects, illustrating architectural practices in London and Dublin. I am also in the early stages of gearing up for a film as a concept artist. In addition, I am always illustrating and working on my own artwork, sometimes even selling the odd piece.

What is the worst/best thing about working for yourself?

The best thing is the freedom. I love being my own boss and doing what I want when I want. My working patterns are quite sporadic and intense. I like having my own space to get in the zone to work anywhere but the desk – normally on a sofa, on a beanbag or sometimes even on the floor. That’s something I couldn’t do when working for a big company. The worst part is dealing with things being more unpredictable and not knowing what will come next and from where – although having said that – I do enjoy how I could be working on architectural projects one week, then artwork the next and then something completely out there and wacky the next.

What has been the biggest hurdle for you starting out and how did you overcome it?

My biggest hurdle was motivating myself when I didn’t have work, especially when I was still working from home every day. It was difficult to separate work and home life when my office was my kitchen table and sofa. Getting out of the house into my new space at Blick has been brilliant and has ensured I feel inspired every day to create something new, even if just for myself.

I am a huge film geek, comic book nerd, and music buff. I am constantly watching films and I am probably one of the last people on earth that still buys DVDs and albums. I can’t take things seriously if I don’t own them. I have thousands of DVDs and CDs, unfortunately, locked away in my family home waiting for the day I have my own house and cave to put them in.

Films, books, and comics have always been a huge source of inspiration when it comes to my artwork. I am mad about Star Wars. I listen to all my music constantly when I work. It helps me to visualize some of my weirder ideas. I am a bit of a metalhead too – likely still stuck in a mid-2000’s Emo phase.

I think mainly by watching films and listening to music. When I have architecture or film work, I am inspired to do the best I can. With my own projects, I tend to wait until something hits me, and then I’ll get obsessed with it and churn out a ton of work based on whatever my latest fascination or idea is.

I like that approach. I don’t really get doing stuff for the sake of it. I like writing music too, and recording my own songs. It’s completely different from everything else I do but similar in the sense that I build up music in layers, in the same way, that I would build up a drawing. Most of it is pretty heavy and weird, so I doubt anyone would ever actually enjoy listening to it!

Ralph McQuarrie – the concept artist for Star Wars. His work is incredible. He is the visual architect of Star Wars as much as George Lucas. His artwork has helped define everything I do in architecture and in my own artwork. My girlfriend bought me an 800-page coffee table book collecting all his work. It actually weighs as much as a fridge and is a hazard to even attempt to lift and read.

What piece of software/tool/equipment would you struggle to run your business without?

I rely on my iPad Pro. I use it to do all my drawings, through a combination of software called Procreate and Photoshop which I can sync up with my iMac. I used to do all my linework with a pen and then color digitally – now though I have made the switch over to full digital hand-drawn illustration. If all else fails I could still do my drawings the old school way with a pen and paper. It’s my colouring that would suffer the most without my iPad.

What are your plans/hopes/ ambitions for the future?

I am hoping to grow Concrete Clouds and work with more like-minded and exciting architects and designers, as well as with more filmmakers. I would love to work as much as possible within Film as that is my ultimate passion. Film offers a world of imagination wholly like any other and is fertile ground for drawing and storytelling. I am also writing a script for a short horror film, which I hope to finish and storyboard myself with the hopes of filming it live-action or maybe even animated!

Finally, what advice would you give to other creatives starting their own business?

If you can – just go for it. Yes, it can be unstable, nerve-racking, and everything in between but I personally, would rather than wake up every day dreading going into a job that my heart isn’t in one hundred percent. I used to call that work fear – The Doom – and I felt the doom massively, (even so bad that on a Friday evening when work had actually finished, I dreaded the thought of Monday morning before the weekend had even started). That’s when you know the doom has gripped you.

Now, I wake up excited, energized, and raring to go knowing that I am working to build something that’s my own – doing something I am truly in love with. Stick to your guns and go with your gut – if you have passion, talent, and good ideas then there is no reason why you can’t be the next person to have a successful business. Loads of people are doing it and working for somebody else is overrated anyway.

You can find their work at www.concreteclouds.co.uk

The theme for Design...

The World Turned Upside Down is a 4-part audio documentary sharing stories of how the 2020 Covid-19 pandemic has impacted the lives and livelihoods of...

The restrictions of the Covid-19 pandemic have escalated the adoption of digital communication technologies into almost everyone’s work and personal...

We love to share the new residents that join Blick Studios. We are passionate about the creative industry here in Belfast because we get to learn and ...

We are reminiscing about our Belfast Design Week Big Design Day Out 2019, where we had created an array of different events last year for both kids ...

Part 2 of our new Small Town Big Dreams 4-part audio documentary ‘The World Turned Upside Down’ sharing stories of how the 2020 Covid-19 pandemic ...

We are excited to introduce our newest Blick Resident @lukehaslett from iakoe, who is based in our Malone Road studios.

#Repost @stbdpodcast
• • • • • •
Small Town Big Dreams is very much a collaborative project. The brainchild of @graeme_theory ...

Francesca Biondi, Art Director of @gallery545online will be having a solo exhibition at their new premises in Blick Shared Studios, Malone Road.
...

Part1 of our new @stbdpodcast 4-part audio documentary The World Turned Upside Down sharing stories of how the 2020 Covid-19 pandemic has impacted ...