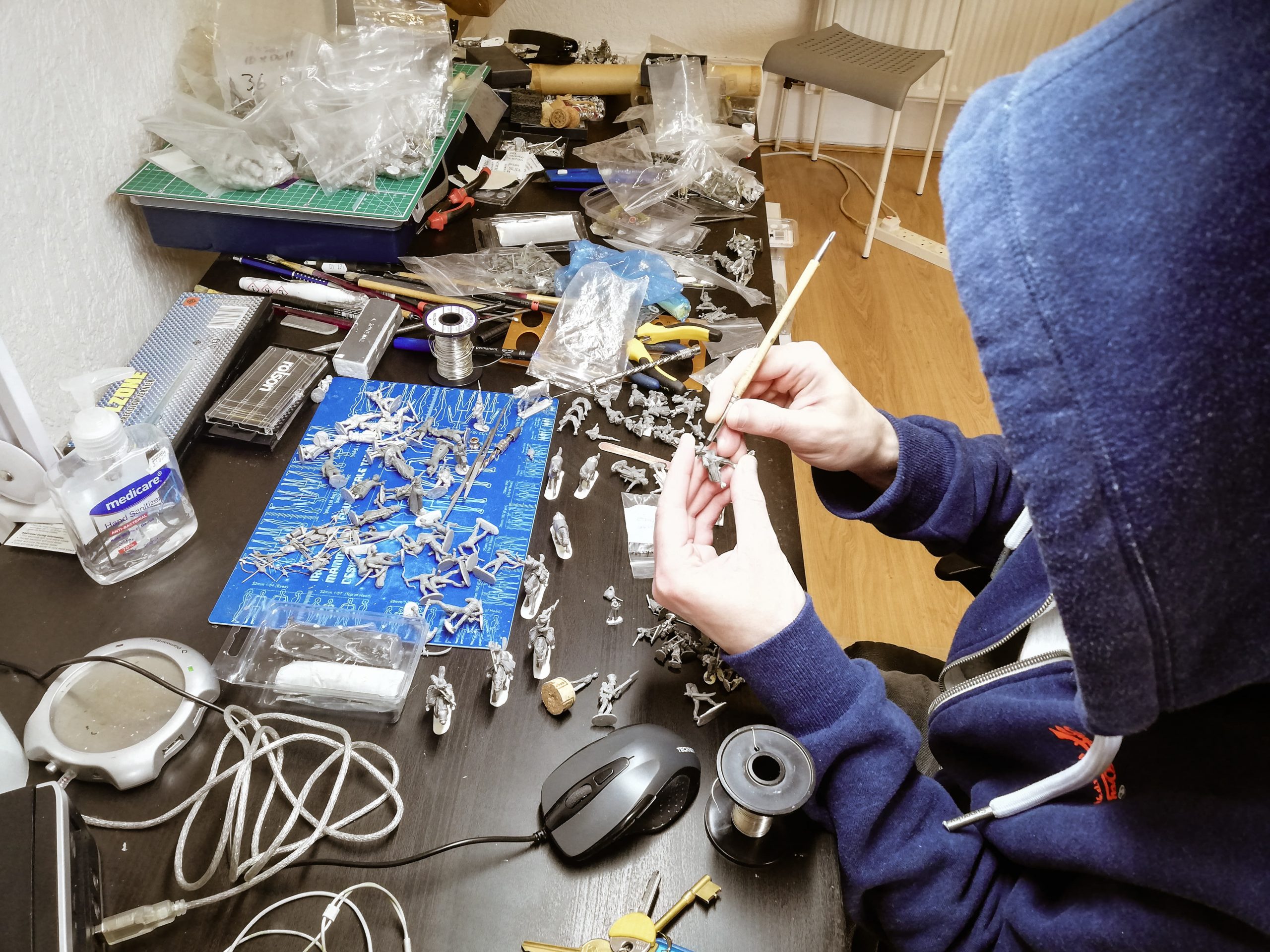 Can you tell us a bit about what you do?

I design and sculpt miniature figures by hand. I mostly do subjects from history, though occasionally some fantasy or sci-fi subjects too.

What is your background in?

I trained in law and was a practising barrister for around six years. I was deeply unhappy in the profession, and came to realise I was not suited to it; I had chosen the wrong path. Leaving was both the hardest and best decision I’ve ever made.

Why did you want to start your own business?

Leaving the Bar was akin to jumping out of a burning aeroplane, but without  a parachute; I was at a loss for what to do next. To tide myself over I turned my hobby of collecting and painting figures into a small business. This was meant to be temporary, but once I started sculpting the figures I just gravitated towards that. I had read a magazine article about a miniatures company that suggested that if you were a skilled painter you could probably sculpt too. So I tried and got the hang of it quickly. To some extent its all an accident, but its an illusion to try to plan everything.

What do you love most about working for yourself?

I like working with people rather than for people, if that makes sense? I’ve never been employed, only ever self-employed and I think I am too used to that now to change. Of course I am always working on commissions, but the clients generally  set the task and you decide how to execute it. I enjoy collaborating but I doubt I’d thrive with someone looking over my shoulder all the time. Its nice to set your own hours and so on, but you have to be responsible to yourself, so there’s not really any room for slacking off. I think it depends on your personality, some people like fitting into a pre-existing structure and some like setting the structure. Its only problematic if you end up in the one you don’t fit into well.

What was the biggest hurdle for you starting out and how did you overcome it?

Getting clients, I suppose.  I thought it would be learning the craft, because I had to teach myself how. It was a matter of getting the tools and materials and trying, because there was no one teaching it,  but I took to it quickly. Now its easier with the explosion of on-line resources, though its still a pretty niche skill.

To get clients I had to contact companies and volunteer some free figures for them on a no-obligation basis. This worked quite well, and I still work for some of those initial contacts, but there were some missteps too. I answered a call for sculptors for some board game figures, which later turned out to be for a Conan the Barbarian game. I didn’t realise it was way  beyond my skill level and I submitted a test sculpt. I thought it was quite good, but looking back it may have been only the 5th or 6th  figure I had sculpted. I got a very polite email turning me down, with some useful pointers as to how to improve, but I was mortified.

I keep little Conan figure sitting on my computer to remind me just how unskilled I was then, and that I should keep trying to improve.

What projects are you currently working on?

Currently on the desk are lots of 17th Century Cossack and Tatar cavalry, who  fought over Crimea and Ukraine, which I suppose still echoes in the present day unfortunately. I am just about to start working on Safavid Persians from the same period. Part of what I like about doing historical subjects is that I get to research periods and cultures that I otherwise would know nothing about.

Mostly great art, whether its sculpture or illustrative. Some people get inspired by movies, but I find films frustrating because they usually get the details wrong, though I’ll admit they can be good for setting the mood. For me, seeing inspiring illustration is much better, especially if the artist manages to tell a good story in the piece. I wish I was given more concept art by clients, but usually I just have to hunt down the historical references myself.

Seeing great work from other sculptors is also inspiring, and can give you something to try to out-do.

If I am working on a particular subject I try to find music that evokes the time or culture, that helps me get into the head-space for imagining what I want sculpt, plus you end up finding unusual music you’d otherwise never had heard.

In terms of sculpting, probably Tom Meier, who is preternaturally talented, so much so that while I admire him I don’t really attempt to emulate him. His work is so fine that it often suffers if not painted by someone as skilled as he is. Alan and Michael Perry are the sculptors I try to learn from, their work is the best balance of detail and practicality; something about their work just strikes the right balance. Sculpting is as much about deciding which details to leave out as it is which to include.

Illustration-wise, I think it would have to be Angus McBride or Nikolai Zubkov. They have similar styles that just jump off the page, and there’s a clarity to their work that makes them the sculptor’s best friend.

What piece of software/ tool/ equipment would you struggle to run your business without?

Practically it would be the colour-shaper, which is a sort of paintbrush with a rubber head instead of bristles. Without it I wouldn’t be able to get the sculpting resin to obey me, getting my first one was the difference between me succeeding and giving up in frustration.

Software-wise I think zBrush will become indispensable. I am currently learning it and will probably end up using it exclusively. Computer design and 3D printing are definitely the future in my industry, in fact they are a large part of the present.  Some people regret the fact that handmade figures are gradually disappearing, but I see it as applying the same skill with a different set of tools, and there’s room for both.

What are you plans/hopes/ambitions for the future?

3D printing is the area I am putting lots of effort into currently, and I am also slowly teaching myself illustration, which is significantly harder. In terms of projects, I am quite excited about working on my own 16th  century Ming Dynasty range, which will probably be a Kickstarter project. I have been collaborating with a Chinese-American friend and we’ve done a lot of research, which is to say he’s done the lion’s share of the work as he can read classical Chinese and I can’t. Once the figures are done I think we should consider publishing a book, because there is almost nothing available in English on the subject. Its quite a niche area, but I’d love to make what we’ve collated available.

Finally, your top tip for other creatives starting their own business?

I am always hesitant about giving advice because I rarely listened to it myself- to my cost. We’re all told not to put our hands on a hot stove, but most of us only learn the lesson after we’ve put our hand on the stove.

I guess if I had to give advice it might be to love what you do, but I’d assume that if you are starting your own business you’ve made it over that hurdle already. But you do have to continue that passion because you are going to encounter problems no matter what, and they are easier to face if you believe in what you are doing.  If that sounds too much like a start-up cliché, then advice that’s a bit more hard-nosed would be to make sure you value your time properly, because if you don’t your clients won’t either.