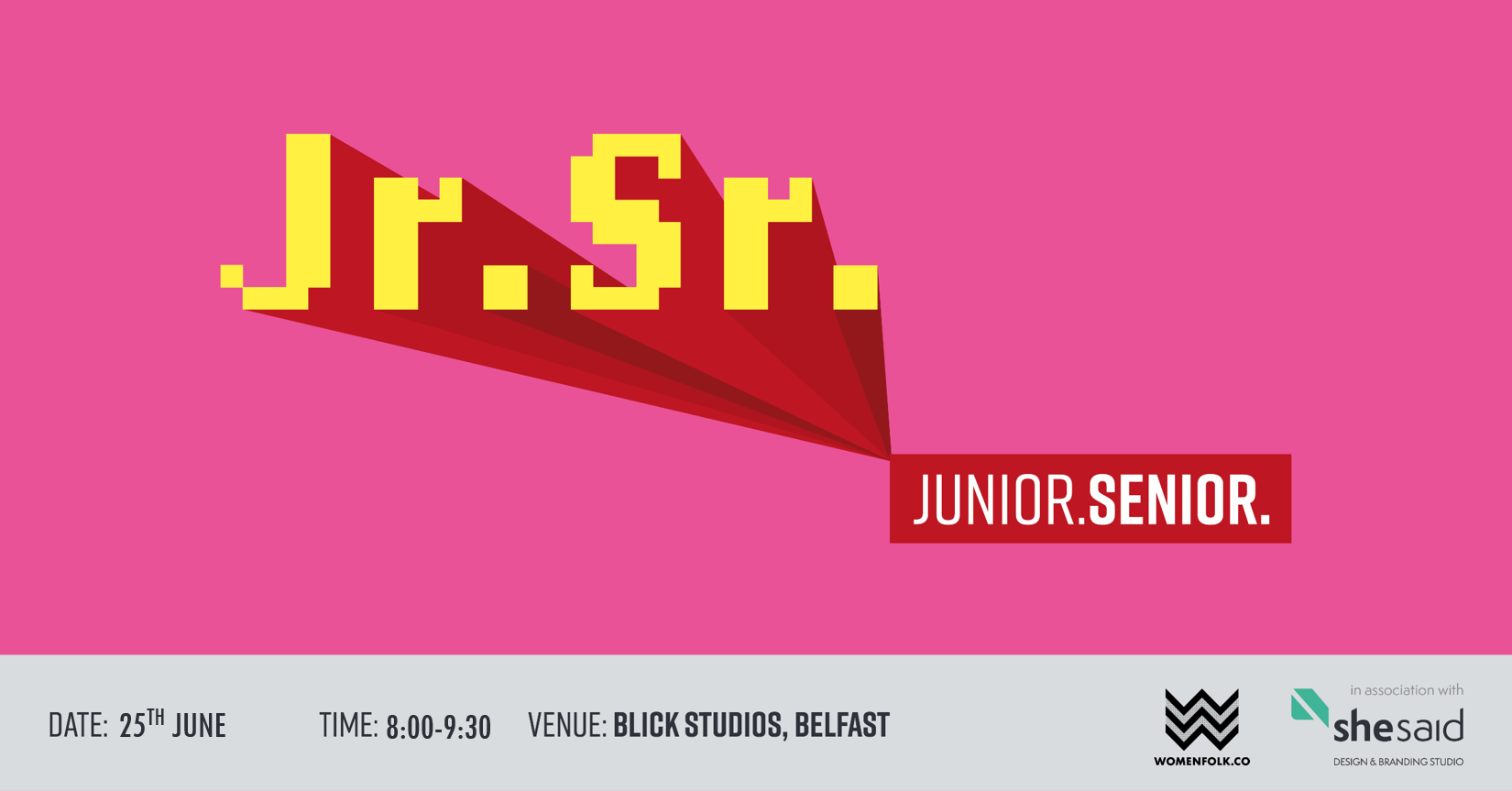 Introducing Junior.Senior. – A series of breakfast events where a senior designer shares the story of their career path to success. Complimented by a young emerging designer starting out in the professional world, telling their story so far and the challenges they face.

Let’s open the floor (and the doors) to the world of Junior.Senior. female designers in Northern Ireland. Create collaborations and help champion young emerging designers.

In association with shesaid – a female led design and branding studio in the heart of Belfast.

Aisling Rusk is the founder of Studio idir, a small, design-led architecture practice that flourishes in the in-between. Aisling is interested in the impact that the built environment can have on the negotiation of difference within societies that are in or moving out of conflict.  She is also interested in liminality, or practices of locating in-between, particularly in divided and contested contexts where divisive binaries are rife.

Gemma is an illustrator/author from the Causeway Coast, now based outside Belfast. When she graduated from Falmouth University in 2011 she already had her first authored and illustrated picture book deal which has been published globally and received many award nominations. Although originally specialising in children’s book illustration, she now also enjoys factual and adult illustration, creating greetings cards, prints and original artwork. Her Causeway Coast roots are of huge inspiration in terms of mark making, colour and the natural theme within her work.

Get your tickets here!

All 4 episodes of our @stbdpodcast audio documentary 'The World Turned Upside Down' on the impact of Covid-19 on the creative industries in ...

@belfastdesignwk took place from 2nd-8th November 2020 and included a Pop-Up Design Museum in venues across Belfast city centre with work by ...

'Ways of Hoping' is the second set of highlights from our Small Town Big Dreams Covid-19 Toolkit for Creatives created by Dr Brian Dixon. ...

'Ways of Coping' is the first set of highlights from our @stbdpodcast Covid-19 Toolkit for Creatives created by Dr Brian Dixon. Featuring ...

Did you know we offer virtual services for all business types with reduced rates for creative industry ...

We are excited to introduce our newest Blick Resident - @dannisimpsonart ⁠
⁠
Danni is an Australian artist who specialises in Commercial ...

This year for Belfast Design Week, we had the pleasure of curating the Pop Up Design Museum which is the second time in a row it has been ...

Filming this week in our main room in our Malone studios which is currently available to rent hourly or for the day or evening, prices and info on our...

We had some gorgeous light shinning on our Malone Road studio this morning! Feels like the last of those crisp autumnal mornings before winter ...

Monday morning vibes at our Cotton Court Studios! ⁠
⁠
We love how different all of our different studio spaces are but still have the same...

We've got that Friday feeling at our Hill Street Studios! We hope that you all have a great weekend and keep cozy!

The COVID-19 pandemic has had an unprecedented impact across the globe across all industries.

As a creative business-focused organization, we...

The 4-part audio documentary series has come to an end. It has been amazing to hear different people's experiences and perspectives on how they ...

We only have a small window. Well not even a window really, but delighted to play a small part in @belfastdesignwk Popup Design Museum by showcasing a...

The theme for Design...

The World Turned Upside Down is a 4-part audio documentary sharing stories of how the 2020 Covid-19 pandemic has impacted the lives and livelihoods of...

The restrictions of the Covid-19 pandemic have escalated the adoption of digital communication technologies into almost everyone’s work and personal...

We love to share the new residents that join Blick Studios. We are passionate about the creative industry here in Belfast because we get to learn and ...

We are reminiscing about our Belfast Design Week Big Design Day Out 2019, where we had created an array of different events last year for both kids ...

Part 2 of our new Small Town Big Dreams 4-part audio documentary ‘The World Turned Upside Down’ sharing stories of how the 2020 Covid-19 pandemic ...

We are excited to introduce our newest Blick Resident @lukehaslett from iakoe, who is based in our Malone Road studios.

#Repost @stbdpodcast
• • • • • •
Small Town Big Dreams is very much a collaborative project. The brainchild of @graeme_theory ...

Francesca Biondi, Art Director of @gallery545online will be having a solo exhibition at their new premises in Blick Shared Studios, Malone Road.
...

Part1 of our new @stbdpodcast 4-part audio documentary The World Turned Upside Down sharing stories of how the 2020 Covid-19 pandemic has impacted ...