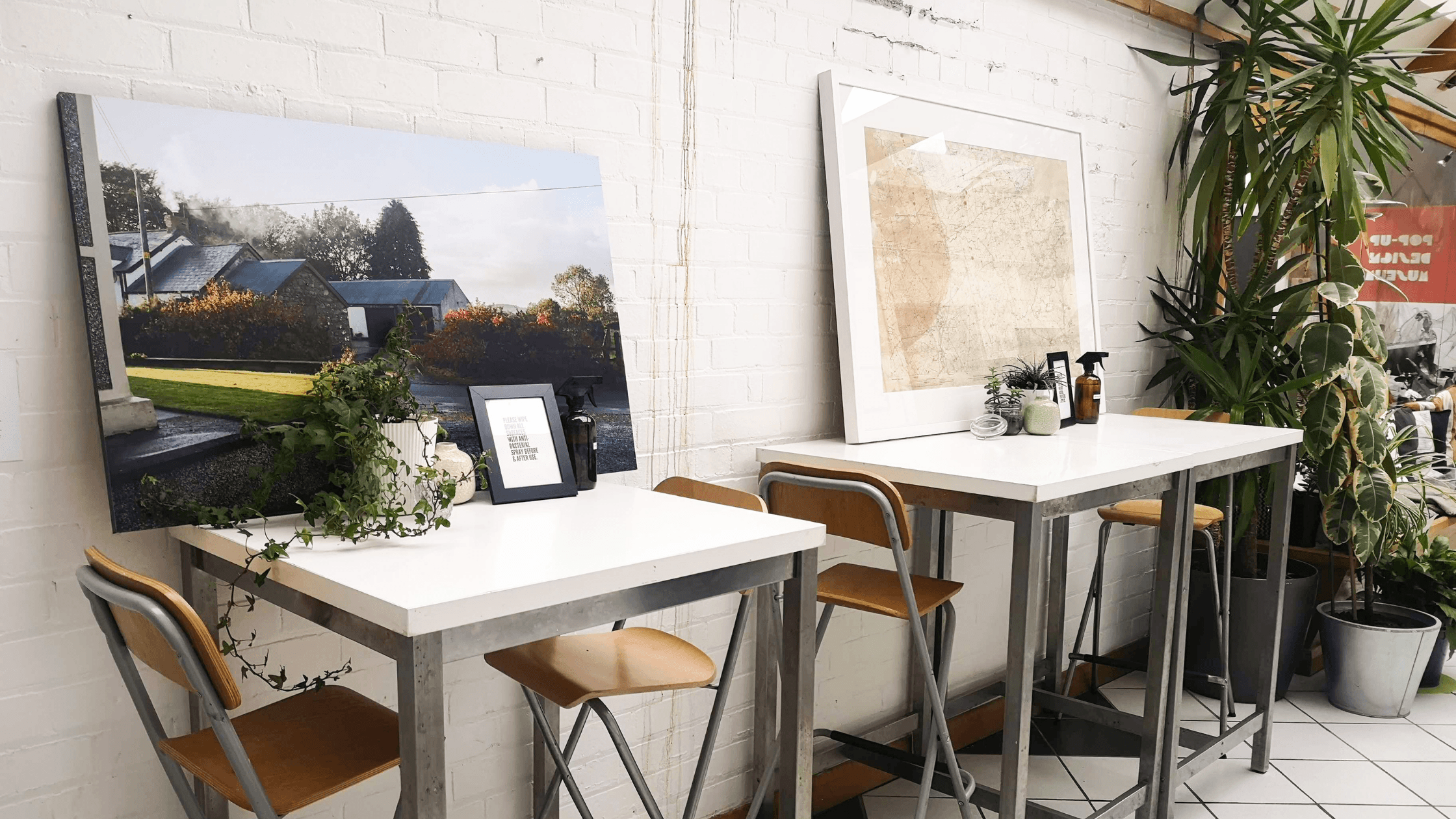 In our Malone Road studios, we currently have an  on going exhibition where we have curated some of the artworks from the Belfast Design Week Pop Up Museum.

The artworks are in response to the Belfast Design Week 2020 theme : Environment. We love the different interpretations of theme and the diversity of work that was produced.

We wanted to highlight some of the artists & designers that took part of the pop up museum and showcase the work that is currently at our Malone Road studios.

“As part of my brief I was asked to explore the environment, way-finding, navigation. As I started to pull some  thoughts together the words ‘You Are Here’ sprung to mind based on those way-finding maps that denote  your physical location generally with a red dot.

My typographic poster celebrates those individuals who sensibly journey into the city centre either as a  local or a visitor to support are local and independent traders. It acknowledges that you being here at this  moment in time is a matter of importance and benefit to these traders as they are try to find their way through  a challenging and turbulent economic environment. ” 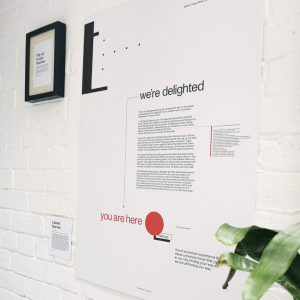 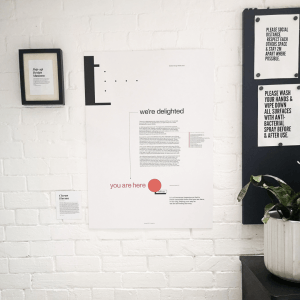 “The dove and olive branch has been a symbol of peace for thousands of years in many different cultures. Early Christians portrayed baptism accompanied by a dove, often on their sepulchres and in the story of Noah in the Bible, when the flood waters receded, Noah sent out a dove which returned with an olive leaf, to show that the Biblical flood was over and that life had returned to Earth.

Beyond symbolism, the current state of world affairs seems to be very different. How does the ‘dove’ look like in reality? Can it fly freely? Or the rise of nationalism worldwide is hampering any peace effort.

In this poster, the dove has been shown with torn feathers, unable to fly, and the olive branch is sewn onto the background, depicting the current situation.” 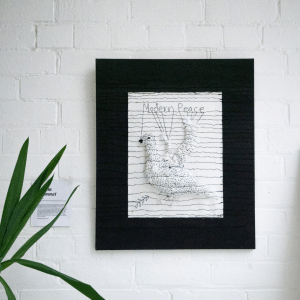 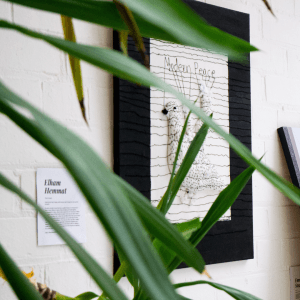 “My work explores the ideas of home, thresholds and their environments. Home is a starting point for understanding our relationship with space, place and the objects around us. It exists as a pre-conscious embedded experience- contrasting with “design”, which develops as a conscious, abstract idea and then becomes implemented in the world around us.  Perhaps home is the underlying bedrock through which our approach to design is mediated.

My explorations of threshold and home are fleshed out primarily through photography, which captures something of the environment where I grew up- a byre, the view between my Grandparents house and my own, the lane, the view out the kitchen window- and many more places in between. The heirloom map is a nod to the tension between cartography (applied logically/rationally) and oral traditions (which are placed/embedded) that define home – now and in the past. When the map is juxtaposed with a subtle view that this document itself inhabits, we find that memories and daydreams begin to fill out the spaces of home in-between.” 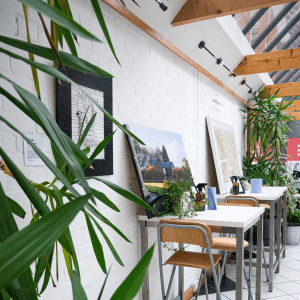 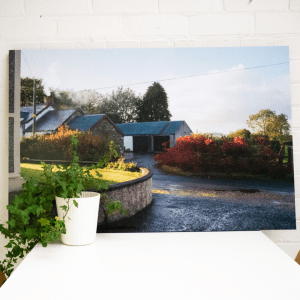 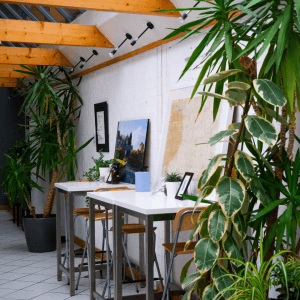 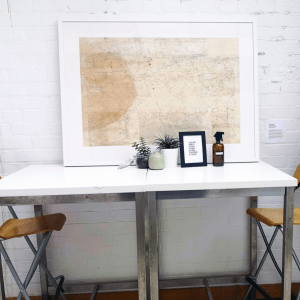 “The illustration I have drawn for Belfast Design Week, shows the history of Belfast’s industry in the docks; from the days of the Titanic and shipbuilding through to the days of Game of Thrones and film studios. I like to juxtaposition weird fantastical elements in my work alongside reality, in this case, I just thought, wouldn’t it be cool to see some dragons sitting on top of the Titanic. It very quickly sums up an important part of Belfast and it’s long history – in one illustration – at least I tried to!” 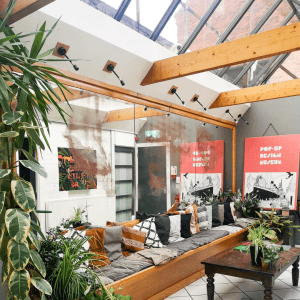 “A motivational illustration to inspire others to think about the environment.” 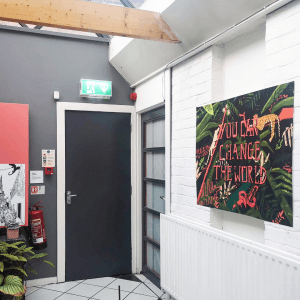 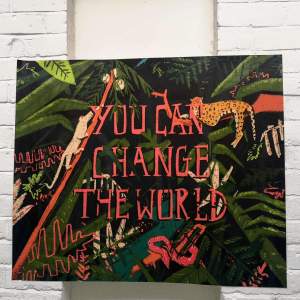 “As someone who has primarily used public transport and other environmental forms of transport in NI their whole life, I wanted to encapsulate little moments across that whole experience, while also thinking about the wider environmental picture. I use public transport all the time because I don’t drive, so this has been my natural environment for years. It’s been really scary to see this change so dramatically due to covid.

I’m really interested in the idea of the Slow Travel movement where travellers look at enjoying the quality of the journey, not just getting to the destination as fast as possible. Sometimes in NI, we’re almost forced into a longer journey if we choose alternative modes of transport. At it’s best it allows us to see more of the natural landscape we are preserving by choosing slower but more environmentally friendly methods of travel.” 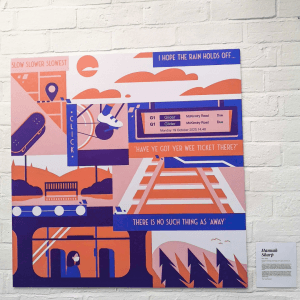 This is some of what is inspiring us this week, along with some great events and funding opportunities. Swipe or see below and check out our blog for ...

We are very excited following a long and tedious couple of years to be back this Autumn with some new ...

We missed a couple of weeks with the July holidays, but are back this week with some of what's inspiring us, along with some funding, support, ...

Sharing some wisdom today from @roryquiggillustration who until very recently was a resident in our Hill St studios for anyone thinking of starting ...

What one thing could you do today to push your business forward and get your week off to a positive start?

Earlier this year we had the opportunity to support Belfast illustrator @griffinillustration with space to paint an elephant as part of Elmer’s ...

We hope everyone had a lovely July break and a chance to enjoy the good weather.

We are back in the office this week and wanted to share this...

We currently have space for either two desks for a close team or one desk for an individual beside a window ...

I love reading and I love books, I also like to support local creatives and...

Hope everyone is having a lovely weekend and not thinking about work. Here's some of the stuff inspiring us this week

Did you know you can hire out...

Did you know you can hire out the ground floor of our Malone Studios. We have two rooms available to hire. Both rooms ...

Happy Friday everyone - to finish the working week here are some of our favourite things for creatives, upcoming funding and support, events, ...

Looking back today at some of our past events as we start to plan a new series of events and workshops for the Autumn. What kind of events would you ...


Slow Business Movement - we are starting to plan our new ...

This week we had a quick catchup with our newest Cotton Court resident creative freelancer @emanuela_mae_agrini_art who told us a bit about herself ...

We have a lovely window desk with a big window and great natural light and view available in our ...

Here is a roundup of some of our favourite things for creatives, upcoming funding and support, events, opportunities and inspiration this week.
...

Blick is all about community, our creative residents and the wider
creative community, but also the people who use our facilities for
various ...

Don't forget to take a break for the long weekend. It can be hard when you're self employed to justify taking time off to relax and rest and...

We have a new feature on our blog. Each week we plan to bring you some of our favourite things for creatives, upcoming funding and support, events, ...

Since the pandemic we have been very busy with new residents and behind the scenes work in the studios, but are planning to start picking things up ...

2007
BY CREATIVES FOR CREATIVES
Blick was set up by a group of creative entrepreneurs struggling to ...

We have one dedicated desk available at our Malone Studios starting from June 2022!

We are delighted to feature @rhea_hanlon_art's artwork in our Malone Road studios atrium where it takes pride of place in this sunny breakout ...

Hill streets lovely breakout areas, where you can sit and have some lunch or a coffee away from your desk

Congratulations to our resident Dani McFerran, founder of award winning Graphic Design studio @doneanddusteddesign, as she was recently celebrated for...

Our lovely main room in our Malone studios is available for hire and we now have a special reduced rates for anyone wanting to make an ongoing ...